Hurricanes: What to know about planning to evacuate

Hurricanes: What to do after the storm passes

Shower activity winding down in SA...☁️ Clouds may stick around for a while, though -- Justin

Good Morning! Showers made their way through the SA area this morning and were mainly light. Unfortunately, just a trace of rainfall has been reported at the airport. The rainfall is now pushing east, with some heavier downpours for those east of I-35. While the rain is generally finished in San Antonio, showers may hang on through early afternoon east of town.  Clouds will be slow to move out, with sun showing up by the afternoon for most of us. Temperatures will reach the mid-50s. We slip into the 40s tonight, with mostly clear skies. Fog is forecast to kick in tomorrow morning and may be thick in spots.  It'll be a bit warmer on Tuesday (mid-60s), before a front knocks temperatures back into the 50s on Wednesday.  As for any more rain chances... well, it doesn't look great. The only chance will be a small window for a shower or two before another front on Friday. Have a great day! 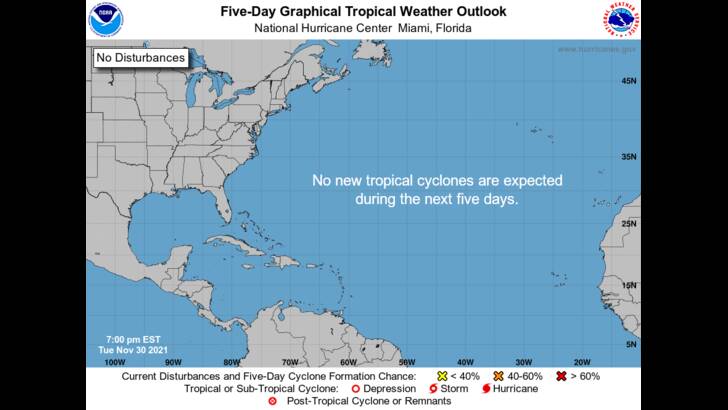 For the North Atlantic, Caribbean Sea and the Gulf of Mexico:

Tropical cyclone formation is not expected during the next 5 days. 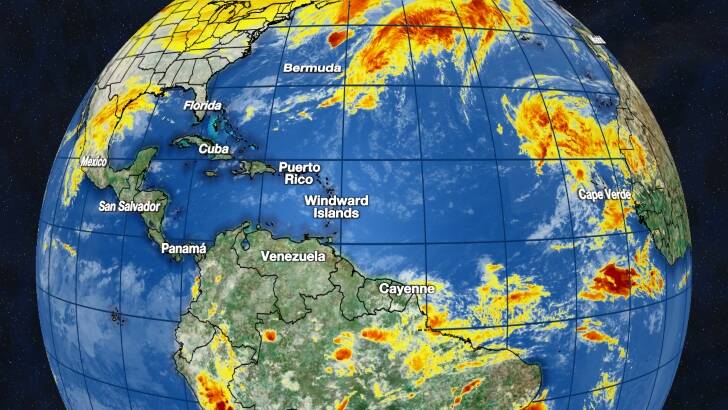 The monsoon trough remains mostly confined to the African continent. The ITCZ extends from the coast of Sierra Leone near 07N13W to 03N30W to 00N47W. Scattered moderate convection is noted from 04N to 08N between 15W and 26W.

A 1020 mb high pressure centered just offshore Galveston, Texas, is dominating the basin this morning. Anticyclonic flow is bringing gentle to moderate NE to SE winds, with seas of 3 to 5 ft. A surface trough across the far western Gulf just offshore the Mexican coast is leading to some fresh southerly winds and seas of 4 to 6 ft within 120 nm of the shore.

For the forecast, high pressure will weaken and move east, and low pressure will form later today along the middle Texas coast, then move E across the northern Gulf through Tue night. This low and its associated cold front will bring strong winds, higher seas, and thunderstorms to the region. High pressure will bring more tranquil conditions Wed night through Thu, but another cold front is forecast to move into the Gulf Fri, and this may bring gales to portions of the SW Gulf starting Fri night.

Strong winds continue within 90 nm of the Colombian coast, due to the tight gradient between high pressure N of the basin and a 1007 mb low over N Colombia. Seas are 7 to 9 ft in this region. Elsewhere across the basin, moderate to fresh NE to E trades dominate, with seas of 3 to 5 ft, and no convection.

For the forecast, the pressure gradient between high pressure in the central Atlantic and the Colombian low will support near gale conditions to pulse nightly through mid-week. Generally moderate to fresh trades will prevail elsewhere. A cold front may approach the NW Caribbean by Wed night.

A stationary front extends from S of Bermuda to the Bahamas. Some strong SW winds are occurring just ahead of the front, N of 29N, where seas are 8 to 10 ft and scattered moderate convection exists. Otherwise, winds are generally moderate with seas of 5 to 7 ft. A surface trough has formed from around 31N72W to just N of the Bahamas, and generally N winds to the W of this boundary have increased to fresh.

For the forecast west of 65W, weak low pressure is likely to form along the stationary front NE of the Bahamas today, then lift NE and out of the area Tue, as the front dissipates. Another low pressure will move offshore FL Tue night, with strong to near gale-force northerly winds likely behind its associated cold front Wed night and Thu.

Farther E, a robust surface trough extends from 26N29W to 11N41W. To the E of the trough, a large area of fresh to strong mainly E winds dominate. These winds have generated swell that is causing seas of 7 to 9 ft to reach as far W as around 40W. In addition, a broad area of scattered moderate convection is noted from 17N to 26N between 22W and 34W. This trough and associated active weather is expected to move W to NW over the next few days, before weakening late in the week. Elsewhere across the central and tropical Atlantic mainly moderate trades dominate with seas of 5 to 7 ft. 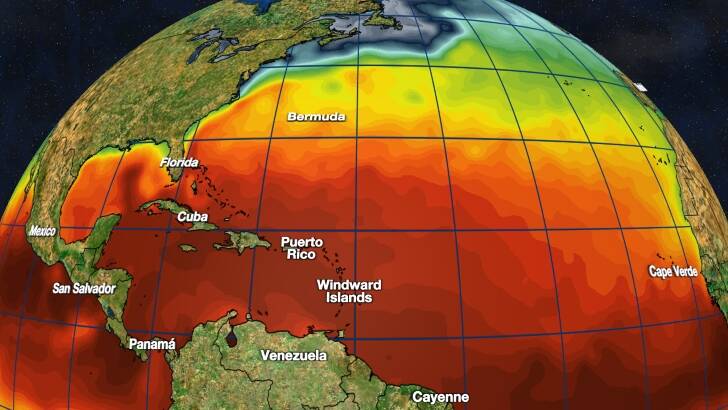